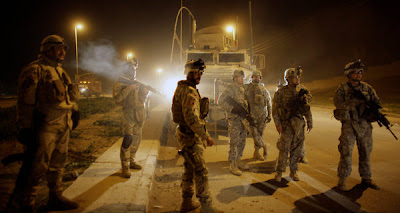 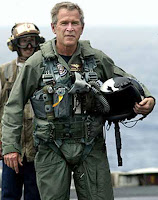 May 1, 2003--Mission Accomplished in Iraq-- President Bush on flight deck
December 15, 2011 marked the most recent official end to the Iraq War [remember May 2003 with Pres. George W. Bush looking buff, but certainly at-sea, on an aircraft carrier declaring victory]. Nine years of war that never had to happen, a pre-emptive non-defensive morally unjust war. No national clergy called it just, the U.S. Catholic bishops had “grave doubt.” Then Pope John Paul II and our current Pope Benedict XVI both stated that this war did not meet just war criteria. Yet the leadership and people of the USA have pressed on--with casualties of 4,487 American lives, with another 32,226 Americans wounded in action *, and Iraqi civilians dead in the hundreds of thousands [our government never counted]. Nor were Iraqi enemy combatants killed ever tabulated, their being hard to distinguish from the rest of the population. Few of us have been able to speak the simple truth. This was at best a bad mistake. Moreover, this was wrong. We can all prayerfully respond, “mea culpa” as in the Latin from the penitential rite of the mass-- “through my fault.” 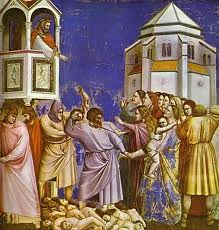 The Holy Innocents by Giotto di Bondone
So much death and destruction leads to no real celebration at war’s declared end. Only a slight sigh of relief on both sides, as we emerge with an economy crippled by two major wars, and they deal with the escalated violence between religious factions, and a decimated infrastructure—the bad fruits of this war of choice. “The tenor of the 45-minute farewell ceremony [Dec. 15th], officially called "Casing the Colors,” was likely to sound an uncertain trumpet for a war that was started to rid Iraq of weapons of mass destruction it did not have.” * This final, low key, passing of the torch to the Iraqis was in a Baghdad area fortified courtyard, in what has been our major airbase in their country. “The tenuous security atmosphere in Iraq was underscored by helicopters that hovered over the ceremony, scanning the ground for rocket attacks.” * I’m reminded of my father-in-law’s dry parting shot for the not-so-welcome guest, “Don’t let the door hit your behind on your way out.” 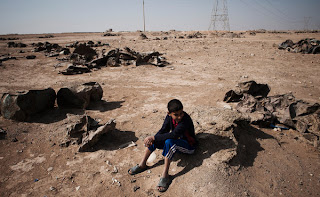 A boy sits in debris from Speicher Base near Sokur, Iraq, which housed American troops until they left the site on Oct 20--Photo from NYT, 11-16-2011
What we’ve left behind is a country without a dictator [as we “decapitated” Saddam] but also without a democracy--with 4 million internal and external refugees [a good number from Iraq’s ancient Christian community], and many of their talented workers and professionals fled or dead. The leadership has been transferred from Sunni to Shiite, more bad blood shed between them in this war than ever before. The Iraqi Shiites are closer allies to Iran, the most powerful Shia country in the region, than they are to the U.S. And Iran [a designated axis of evil] is our probable next target in the interminable Wars on Terror. 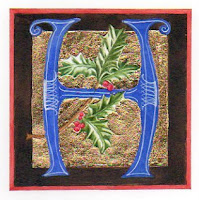 ow do we, the most militarily mighty of the worlds’nations, stop this marching to war after war? The first step is to confess the sin, to admit we were wrong, from the leadership down to each and every one of us. Those who were for this Iraq War either operated from false ulterior motive, or allowed themselves to be mislead. Those who were against did not do enough, or slaked their consciences with, “there’s nothing I can do.”
I place myself in the class of those who did not do enough. Seeing the grave importance of avoiding this unjust invasion a group of us circulated the Iraq Peace Pledge at our local churches. In one weekend early October 2002 here in Port Huron, nearly 400 signed against the war, with 41 of us pledging,“If the U.S. sends combat troops, invades by proxy, or otherwise significantly escalates its intervention in Iraq, I pledge to join with others to engage in acts of nonviolent civil disobedience at U. S. Federal facilities, Congressional offices, military installations, or other appropriate places.”
The war came with “shock & awe” on March 20, 2003, and none of us to my knowledge responded to our pledge. No civil disobedience arrests here. As a nominal leader of the pledge, I had a few ideas, received no call from other leaders, found no inspiration catch hold, was busy with other things, and did nothing except go to a Pax Christi conference to present a talk against the war. A number of us resisted federal income tax for this war, redirecting some tax in an “Iraq Peace Bonds” campaign for a while, but this was minimally effective, and lost momentum. 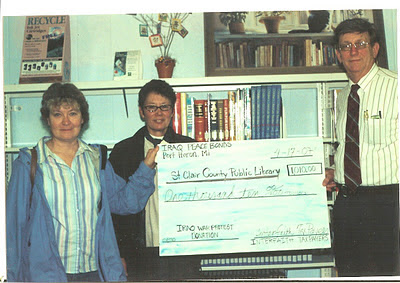 Iraq Peace Bond [in place of income taxes for war] presented to St. Clair Co. Library on May 2, 2007
We did pray for an end to this unjust war, and continue to. For four years now our Holy Trinity Church has held a Novena of prayer nine days before the August 9thanniversary of Blessed Franz Jagerstatter’s death by execution. He was an Austrian Catholic who wouldn’t fight in Hitler’s unjust wars, and we ask his intercession with the Almighty to help end this Iraq war, and Afghanistan, all wars. The almost complete pullout of our troops from Iraq this month is certainly an answer to many prayers, and courageous actions, at home and abroad.

God bless us with the faith to be inspired in new swords-into-plowshares ways, to follow your infant Son as we await His birth in a stable, all-powerfully vulnerable. Help us to make present Jesus the Prince of Peace, in our hearts and in our nation. 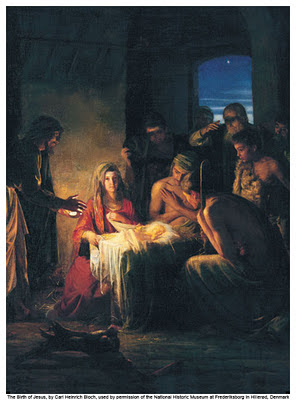 * These citations, quotations, from “U.S. Ends Mission in Iraq” NYT, 12-15-2011. This article, plus all those on Iraq in the NYT that day, are worth reading. http://www.nytimes.com/2011/12/16/world/middleeast/panetta-in-baghdad-for-iraq-military-handover-ceremony.html?_r=1&ref=world
Posted by Michael J. McCarthy at 2:41 PM

IN THE SPIRIT OF
JOURNALIST I. F. STONE &
PROPHET-MONK THOMAS MERTON
FOR SUPPORT SUBSCRIPTION -
SEE PROFILE